HomeNewsLamu PortBERTH ONE OF THE PORT OF LAMU NOW FULLY OPERATIONAL

BERTH ONE OF THE PORT OF LAMU NOW FULLY OPERATIONAL 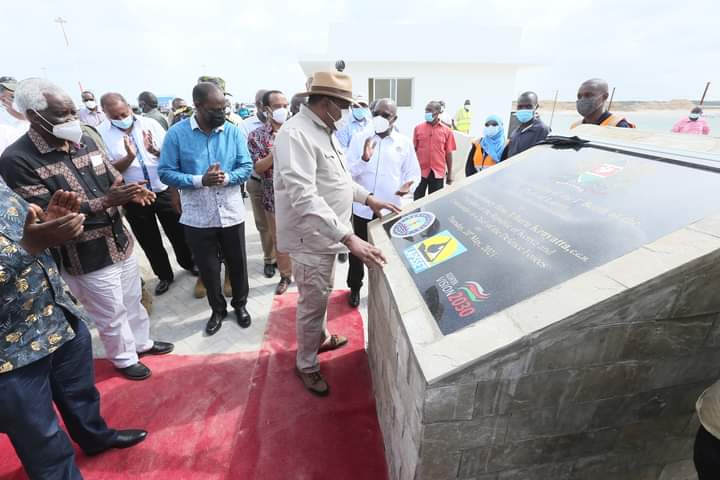 His Excellency President Uhuru Kenyatta on 20th May, 2021 officially operationalized the first Berth of the Port of Lamu. Speaking during the Operationalization Ceremony, President Uhuru Kenyatta noted that the Port of Lamu will transform Lamu County in to a major trade and logistics hub and accelerate rapid economic transformation through opportunistic business ventures. The various business sectors such as; – Real Estate, Hospitality, Livestock, Manufacture and the Service Industry, are expected to arise due to the operations of the LAPSSET Corridor flagship Project.

The President moreover commissioned the Garsen-Witu-Lamu (110KM) road, part of the LAPSSET Corridor alternative routes that connects the 10km Lamu Port Access Road to Garissa County, in addition the Head of State officially launched the construction of the Lamu-Garissa-Isiolo (Phase 1) road, a major LAPSSET Corridor Highway. Addressing area residents, President Uhuru Kenyatta noted that through the construction of the roads in Lamu, travel time had greatly reduced, security enhanced and various investments witnessed along the road projects.

Accompanied by several Cabinet Secretaries, Governors and Senior Government Officials, the Head of State witnessed the berthing of Lamu Port’s maiden ship MV CAP Carmel and offloading of its cargo to trucks headed to various destinations, a remarkable site of a dream come true for Kenya, at a place that was once a vast sea and an adjacent hinterland characterized by bushes.

Having a key length of 400M and a width of 800M, and a draft of 17.5 Meters the 1st Berth of Lamu Port by international standards is huge, having a capacity to handle and estimated 4,394 TEUs or (13,182 at 3- high staking). It is expected to handle the Transshipment business targeting cargo destined to Tanzania, Mozambique and the Indian Ocean islands of Zanzibar, Seychelles, Comoros and Madagascar; containerized and bulk cargo as well as RoRo (motor vehicle imports).

The Port has been designed to world-class standards,  and with modern facilities, it is expected be fully automated making port processes efficient as well as streamlining Cargo handling and clearance procedures.

In compliance with the International Maritime Organization’s set of security measures for Ships and Ports (ISPS code), a Port Facility Security Assessment (PFSA) report and Security of Cargo report were developed by the Kenya Maritime Authority, the Kenya Ports Authority further developed the Port and Cargo Security Plan incorporating recommendations from the PFSA. This plans are aimed at securing Lamu Port against threats such as, piracy, armed robbery, contrabands, seaborne illegal immigrants and terror as well as secure the 1st Berth for operations even as construction of the remaining two Terminal Yards are in progress.

At Lamu Port, there are strategically stationed Boats within the port vicinity and continuous Sea patrols by both the Navy and Kenya Coast Guard for enhanced maritime security.

The security of cargo and motorists is extended to the hinterland through joint efforts of security forces drawn from the Kenya Defense Force, Critical Infrastructure Protection Unit among others and a security masterplan has been developed to secure the entire LAPSSET Corridor.

In compliance with the IMO Marine Pollution Regulations, an Oil Pollution Emergency Response Plan is in place for Lamu Port providing for; –

His Excellency during his speech pledged his support to Lamu County in the planning for towns and cities desiring a comprehensive Spatial Plan managing population and Urban Development that is anticipated to arise from the development of the Port of Lamu. The President further assured that the remaining 2 Berths will be completed before the end of the year and thereafter commission operations of the three Berths of Lamu Port together with various Regional Heads of State.