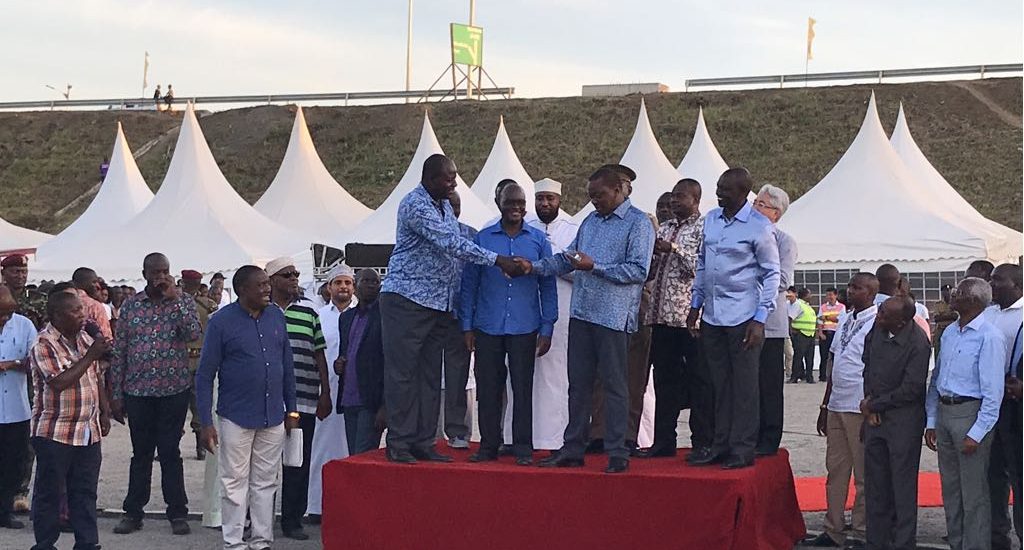 His Excellency President, Uhuru Kenyatta was on 23rd May 2018 awarded the Babacar Ndianye Grand Trophy organized by the Africa Road Builders during the 2018 Babacar Ndiaye Grand Trophy Award event that took place in Busan, South Korea. He was chosen for his championing of construction and implementation of three key Regional Infrastructure Projects areas including:

1. LAPSSET Corridor Program where construction of 1st Three Berths of the Lamu Port commenced in August 2016 and has achieved 60% completion rate to date.

2. Standard Gauge Railway (SGR) which is part of the transport infrastructure of the Northern Corridor. In June 2017, H.E. President, Uhuru Kenyatta commissioned the operation of phase I line from Mombasa – Nairobi. The SGR is intended to provide seamless connectivity and access to the international market through the sea to the landlocked countries of Uganda, Rwanda, Burundi, Democratic Republic of Congo and South Sudan. Currently, the construction of Phase II from Nairobi – Kisumu is ongoing.

The Babacar Ndiaye Grand Trophy Award is an annual event that was conceptualized in 2016. The event is organized and sponsored by the African Development Bank (AfDB) Group as an appreciation of Heads of State in Africa who are improving regional integration & trade by championing construction and development of trans-boundary transport infrastructure projects so as to connect markets in a particular region. These trans-boundary projects include new trade corridors where businesses will grow and prosper together in an investment friendly environment.

The award event 2018 took place in Busan, South Korea from 21st to 25th May, 2018 during the 53rd Board of Governors Annual General Meeting and the 44th Annual Meeting of the African Development Bank (AfDB) Group. The theme of the 2018 event was “Transport and Industrial Transformation of Africa”.  The event was attended by various leaders from various institutions from around the globe including Ministers, Board of Directors of both government Agencies and private firms, Chief Executive Officers, opinion leaders and different representatives of various Non-Governmental Organizations (NGOs).

The objectives of the event are: to promote modern and efficient roads, rail and other transport methods for a developed Africa; to stimulate greater mobility of both good and people in Africa; and to promote, around the road and transport innovative services that contribute to boosting the African economy.

Name of the Award

As indicated above, this most prestigious prize is rewarded to the Head of State, whose country enjoys exemplary success in terms of roads and other transport network. It symbolizes their contribution to providing concrete solutions for the transformation of Africa.  It aims to help boost good policies and practices in the field of transportation sector.

In 2017, their Excellencies President, Paul Kagame (Rwanda) and President, Macky Sall (Senegal) won the Babacar NDIAYE Grand Trophy Award for their leadership in initiating new projects and continuing the efforts already undertaken. The Selection Committee chose the President of Rwanda, especially for the order and cleanliness that characterize the roads of the capital, Kigali. Kigali is classified by the United Nations as “the cleanest city in Africa”. As for the President of Senegal, he was appointed, particularly for major projects for instance the Regional Express Train (TER).